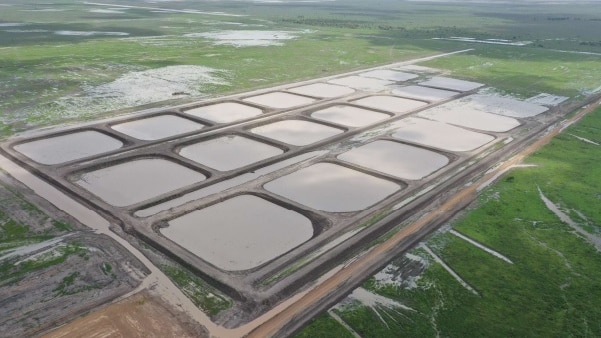 Plans to build the world’s largest shrimp farm at Legune Station in the Northern Territory have been deemed unviable by ASX-listed Seafarms.

The company’s share price fell 42% on Thursday, after it published a damning review of the Sea Dragon project – revealing the project was ‘not viable in its current form’.

Seafarms said the review identified “a number of challenges, as well as opportunities to reduce project risk” and the main conclusion was the need to “pilot and prove” the ability to successfully raise shrimps in Legune.

He said the project in its current form ‘would not generate acceptable financial returns’ and involved ‘unacceptable risks’ such as biosecurity, environmental conditions, remoteness and grow-out tanks which were ‘unproven. in Australia”.

Was it too big to be true?

When the ambitious $2 billion project was first hinted at in 2012, many skeptics felt it was too big to be true.

The company has long spoken of plans to produce over 100,000 tonnes of black tiger prawns each year from one of Australia’s most remote farms.

Construction of the first phase of Legune Farm began last year, with 21 ponds partially constructed, but that work will now be on hold.

There was an air of optimism about the Sea Dragon (PSD) project when Seafarms hired former Inghams boss Mick McMahon as CEO late last year.

Speaking to shareholders today about the review, Mr McMahon said there was no funding to sue the PSD “although we thought [it was viable]”.

“It’s fair to say we were shocked by what we found when we entered the business,” McMahon said.

“I feel an important responsibility to the shareholders who have invested their money in this company and especially those who have done so since I joined the company.

“I apologize to them for what we had to present today.”

In 2015, the Sea Dragon project received major project status from the Northern Territory and Federal Governments.

The Government of the Northern Territories spent around $50 million on infrastructure to help the project come to fruition.