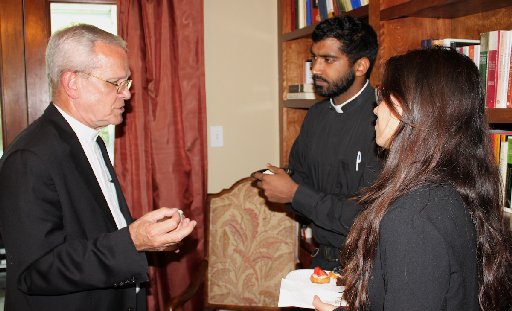 Eastern Catholics share culture and experiences at rally in Chicago

CHICAGO — Eastern Chicago-area Catholics, clergy and laity, met midsummer on the University of Chicago campus to discuss the needs and good works of the church in their home country and to begin new mission-oriented relationships.

Msgr. Peter Vaccari, president of CNEWA, gave a 30-minute presentation on the mission of the agency, explaining how CNEWA works with the various Eastern churches in their countries of origin to advance their humanitarian and pastoral programs. An hour-long discussion and social followed.

At least seven Eastern Churches were represented at the July 19 gathering, including a member of the Orthodox Church in America.

“It was like being with brothers and the mutual appreciation was very evident in the conversations,” said Father Jerry Mathew, pastor of St. Mary Syro-Malankara Catholic Church in Evanston, north of Chicago.

Eastern Christians in the country’s third-largest metropolitan area need the opportunity to come together, “to share each other’s rich culture, experience and knowledge, as we care of our relatively smaller congregations with varying challenges,” he added.

Several attendees cited St. John Paul II’s well-known reference to the Eastern and Western Churches as the two lungs of the church and said the event provided an opportunity to experience “two lungs.”

“It is vital that all branches of Christianity are connected to each other,” said Peter Tokatlian, a member of the Orthodox Church in America and a regular participant in Lumen Christi events since 2004.

“Eastern churches are, especially today, endangered species in lands swept away by powerful and hostile historical and religious forces,” said Tokatlian, a retired defense attorney. “This meeting was very important, the first step in the vast undertaking that awaits us in this field.”

In light of the three-year National Eucharistic Revival currently underway in the United States, he said he would like to see the gathering followed by “greater fellowship among the different churches, especially around the altar.”

“The intellectual programming would be phenomenal and very necessary. However, perhaps the simplest course of action and the most basic need would be to foster openness to pray together,” he said.

“It can present its own logistical and pastoral challenges, but I would find it remarkable if different congregations simply pray together as brothers and sisters of the Father and participate in the same Eucharistic body,” he said.

While in Chicago, Vaccari also attended a prayer service and dinner with the Ukrainian Catholic community and breakfast with Bishop Jacob Angadiath and Bishop Joy Alappatt, of the Syro-Malabar Catholic Diocese of St. Thomas of Chicago.

Alappatt, who turns 66 on September 27, will be enthroned as the second bishop of the national eparchy on October 1.

He had served the diocese as an auxiliary bishop for 14 years, when Pope Francis appointed him on July 3 to succeed Angadiath, who is 76.

Canon law requires bishops to submit their resignation to the pope at the age of 75. The pope accepted the resignation of the eldest bishop the same day he named his successor.

Angadiath was appointed as the first bishop of the diocese by Saint John Paul, who established the diocese on March 13, 2001.