[Episcopal News Service – Canterbury, England] The Rt. Reverend Mary Glasspool made history when she was elected Suffragan Bishop of Los Angeles in 2009, becoming the second openly gay – and first lesbian – bishop in the Anglican Communion.

At this year’s Lambeth conference, she is now the assistant bishop of the Diocese of New York and she is making history again, along with her wife, Becki Sander. Glasspool is among the first openly LGBTQ+ bishops to attend the conference, although their spouses were not invited. Glasspool and Sander, a social work professor, have been together for 34 years.

Their relationship – along with those of several other bishops – took on added importance at this conference, where bishops opposed to same-sex marriage said they would not receive communion with them.

Glasspool and Sander spoke to Episcopal News Service about the strange contradictions they experienced here in Canterbury, from the politics of sleeping arrangements to the kinship Sander experienced with the other “purple spouses” – as they call themselves – themselves – LGBTQ+ bishops. This interview has been edited for brevity and clarity.

ENS: How does it feel to be here?

Glass pool: He feels good. I think I feel stable. I think I’d be inconsolable if Becki wasn’t here with me. I asked her to come even though she wasn’t invited. So from the start we knew I was going to Lambeth and Becki was coming to England. And housing was difficult because it brought out the true colors.

It was very confusing the first 24-48 hours, largely because we had to find accommodation for Becki. And when we finally found a room, it was a mile and a half across campus. The Lambeth Conference made, I think, a Faustian deal with someone than LGBTQ bishops’ spouses who weren’t explicitly invited – we’re not going to sleep in the same room. This is the third year. It’s not a very mature view of things.

ENS: What did you think of the inclusion of language rejecting same-sex marriage in the first version of the Call for Human Dignity?

Glass pool: When the [draft] calls came out, eight days before the first day of the meeting, it was an upheaval. Part of the upheaval was when you had these working groups that wrote these drafts, how did that happen without the working group that wrote the human dignity thing knowing?

The Lambeth Conference was never a legislative conference. And we went through the Windsor report, we tried the Anglican Covenant, and those things…didn’t get anywhere. And there are elements in other calls that try to impose a structure that doesn’t exist. The Anglican Communion has never been anything more than a loosely knit community of churches identified either by nation or ethnicity. And that means that the language we speak is the language of human relations. We make connections. We network. … The Lambeth Conference is about praying together, listening together, walking together, talking together.

And you know what? I pray for [Archbishop of Canterbury] Justin Welby every day. I mean, it’s a huge thing. This is a difficult work.

ENS: Some of the conservative bishops said they would refuse to commune with you. What does it do?

Glass pool: It’s already arrived. I noticed that [on July 28], even before the press release was published. I just noticed [them sitting during the Eucharist].

ENS: Did you think that had something to do with your presence there?

Glass pool: I had strong suspicions. When I spoke with friends later, I was sort of scolded – that’s what a lot of us do. Don’t make any assumptions, ’cause you’ll go and [tell] stories that are not true. So I tried to stay open. It’s so wrong – when someone for some reason doesn’t receive Communion, it hurts! That’s not who we are as a church. We try to express our unity in Christ.

Sacrament, they exclude each other. I am here! I receive Communion! They reject each other, and that’s what’s sad.

ENS: Becki, how does it feel to be here as a bishop’s wife but to be excluded from official wives’ events?

Sander: I don’t suffer from not being in a photo. What hurts me is the incredible opportunity [being missed]. I heard from heterosexual spouses yesterday; their first small group experience in the morning blew them away, the depth, the reality with people they will never see again. It made me sad because I would have loved to have this experience.

ENS: Were you able to connect with the other spouses?

Sander: Yes! It is fabulous. All of a sudden, all these [straight] spouses want to meet us, have tea with us, have lunch with us. I meet Tom [Bishop Thomas Brown’s husband] and Susan [Bishop Bonnie Perry’s wife] here, because we don’t know what to do, which is exactly the point. That’s what I would have done if I had been here and invited!

You know what I would like the most? I would sincerely like to talk to spouses who don’t think I should be married to Mary, because I’ve never heard of that. I mean, I’ve been isolated in my world. It’s an opportunity. 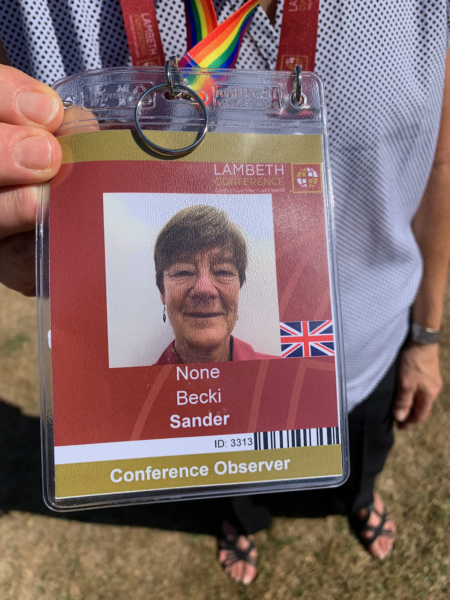 Someone who disagrees… or believes in [1998 Lambeth Resolution] 1.10 is who I’d like to connect with, because I need to hear that. I need to hear where it’s coming from.

ENS: Why does it say “None” above your name on your badge where other people have titles?

Sander: Well, it’s a funny story. I didn’t know it said “None”. I have vision problems. [When I was registering,] it was just an online form and I’m trying to register as a watcher and it said “Title” and I just put “none”. Did I think they were going to print it? Nope! I mean, the options were Mrs., Mrs., and I’m a doctor, so I could be Dr. Becki Sander, and I’m like, no.

ENS: Do you ever feel like you’re in the spotlight here?

Sander: No. I feel a bit naive. And I don’t want to miss an opportunity to testify. Should I have been better prepared? Should I have done more homework? And Mary is great at that with me. She says, “Be you. Just be yourself.

I was hoping that might not be the case [focused on sexuality]. [We need] turn to the larger and more critical issues. Where is the poverty, racism, climate change, war?

– Egan Millard is associate editor and reporter for Episcopal News Service. He can be contacted at [email protected]