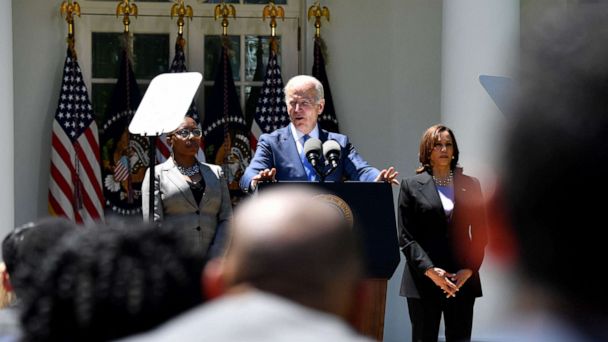 “This is going to change people’s lives,” Biden said from the White House Rose Garden. “From rural Appalachia to Brooklyn, to Black Belt families who have struggled to access the internet.”

Biden said 20 internet providers have agreed to boost speeds or cut prices, to offer Affordable Connectivity Program, or ACP, enrollees high-speed internet packages for up to $30 a month. The new private sector participation, coupled with the ACP grant covering up to $30 per month (or $75 per month on tribal lands), essentially makes the program free.

“Broadband internet is no longer a luxury, it’s a necessity,” he said. “And that’s why the bipartisan infrastructure act included $65 billion to make sure we expand high-speed internet access to every part of the country, urban, suburban and rural — everywhere.”

Alisha Jones, a beneficiary of the internet program, was also on stage as Vice President Kamala Harris touted the initiative to connect Americans “with opportunity.”

Billions of dollars in funding for the grant program were included in the $1 trillion bipartisan infrastructure bill that Biden signed into law last November. So far, more than 11 million households have already registered to receive this benefit, but the White House said 48 million households are eligible.

Participating companies unveiled on Monday include AT&T, Verizon, Spectrum and Comcast, as well as several regional companies, which together cover more than 80% of the US population, the White House said, or nearly 40% of homes nationwide.

Biden thanked these companies for working with the administration to provide what he called “a great example of what we can accomplish when the federal government and the private sector work together to solve serious problems.”

As he continues to push his infrastructure agenda forward, Biden has repeatedly recalled stories of families heading to McDonalds parking lots during the pandemic to connect to Wi-Fi.

“How many people have you seen in McDonald’s parking lots with their kids in their cars because they have internet access?” Biden said in a speech in Scranton last October, a story he also recalled on Monday.

“How many times have you seen a mom or dad drive into a parking lot outside McDonald’s and just so you can get on the internet, where the kid could literally do their homework during the pandemic,” said he declared. “It’s just not right. It’s not who we are, and we’ve seen during the pandemic how essential high-speed internet really is.”

Households whose income is at or below 200% of the federal poverty level, or who have a family member participating in one of the many federal programs, including the Supplemental Nutrition Assistance Program (SNAP), Pell Grants , Medicaid and Supplemental Security Income, are eligible for the program. Americans can see if they are eligible at Getinternet.gov or by calling 877-384-2575.

The administration’s push to cut internet costs for families comes ahead of a dire inflation report expected on Tuesday, as Biden scrambles to keep prices low for Americans ahead of the mid-election season. mandate.

“My top priority is to fight inflation and lower prices for families and the things they need,” Biden said Monday. “Today’s announcement will give millions of families a little more, a little more breathing space, to help pay their bills.”

2022-05-09
Previous Post: Monoclonal antibodies for post-exposure prophylaxis could save lives and money
Next Post: Impact of COVID-19 on Online Gaming Accelerator Software Market Share, Size, Trends and Growth from 2022 to 2031 – Queen Anne and Mangolia News