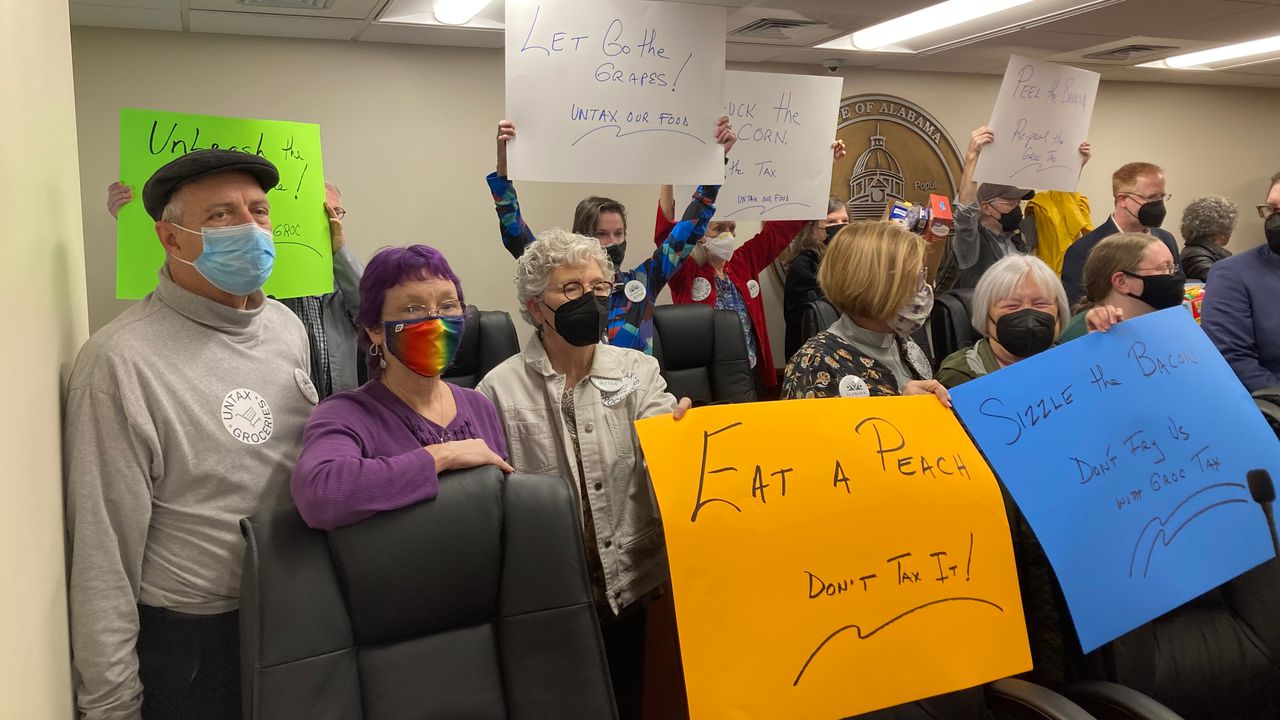 Alabama Arise, which has fought for more than 20 years to repeal the Alabama sales tax on groceries, renewed that effort today, hosting a rally at the State House with Republican and Democratic lawmakers who support the idea.

Alabama is one of only three states, along with Mississippi and South Dakota, that collects full sales tax on groceries. Sales taxes are a key source of funding for Alabama’s public schools, and the grocery tax provides about $472 million annually for the Education Trust Fund. That’s according to Alabama Arise, which cited information from the Legislative Services Agency.

Sen. Andrew Jones, R-Center, and Rep. Mike Holmes, R-Wetumpka, introduced bills this year to exempt groceries from state sales tax. The proposals are constitutional amendments that would require voter approval if passed by the Legislative Assembly.

The bills would replace revenue lost to the education trust fund by capping the deduction of federal income taxes paid that Alabama taxpayers use to reduce their state income taxes. . The deduction would be capped at $4,000 for individuals and $8,000 for couples.

According to Alabama Arise, the trade-off between repealing the groceries tax and capping the deduction would result in net tax savings for all but the top 5% in Alabama, those earning $311,000. per year or more.

“The people who get the most help are those in the bottom percentile, those who have the most difficulty putting food on the table,” Jones said at the rally. “So this is a good, financially sound bill. This will have no impact on the education income of our children.

Rep. Penni McClammy, D-Montgomery, also plans to introduce legislation to repeal the grocery tax, as well as the over-the-counter drug tax. McClammy spoke at today’s rally and spoke about the decisions families face as they stretch their dollars to cover necessities.

“Am I buying clothes today? Do I buy food? Am I paying my electricity bill? And I had these choices that I had to make because I was a caregiver for over 16 years with my family,” McClammy said. “If you haven’t all had this experience before, as the ancients said, just keep hanging on because you will.”

Alabama Arise has tried since 1999 to drum up support for repeal of the food tax, including repeated efforts by former state Rep. John Knight of Montgomery. Alabama Arise is a statewide, nonprofit, nonpartisan coalition of congregations, organizations, and individuals that advocate for policies that help low-income families.

With just eight days left in this year’s legislative session, McClammy said she doesn’t expect the plan to pass this year. The Jones and Holmes bills did not advance in the House or the Senate.

Still, McClammy thought it was important to have a crowd at State House to renew the push. Alabama Arise distributed talking points urging those who attended the rally to speak to lawmakers today.

“I think today is important because you all showed a mass of people here to say, ‘Hey, we want this done,'” McClammy said. “And I think that’s very important to show that we have support behind us.”

Alabama Arise has released polling results showing support for the repeal of the tax. Polling firm Cygnal conducted the survey of 631 likely voters in the 2022 election on January 13-14.

Respondents were asked: Alabama currently imposes a 4% sales tax on groceries. Would you support or oppose eliminating the grocery tax and replacing the school funding it generates with higher taxes for corporations and wealthy individuals?

Robyn Hyden, executive director of Alabama Arise, said a year’s total grocery tax is equivalent to two weeks worth of food for a household.

“Imagine all those food carts going into our state budget instead of feeding starving families,” Hyden said.